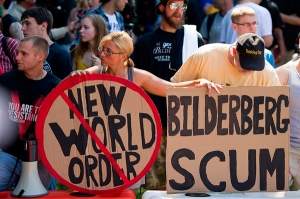 This weekend the Bilderberg conference is being held at the Westfield Marriott hotel in Chantilly, Virginia. It is fascinating to see how much media coverage the event is getting, and also how many people on Twitter are talking about it. When I first heard about Bilderberg a couple of years ago, I was intrigued. A meeting of the world’s most powerful people from America and Europe? A secret guest list? A secret agenda? But equallyintriguing was how successfully the group had kept their activities secret. I know how hard it was to find information about the Bilderberg Group because of the months of research I did for my novel, Conspire.

When I started writing Conspire, back in 2010, there was literally only a handful of articles about the conference on the internet – mostly written by the Guardian’s Charlie Skelton. Subsequently, a journalist with some similarities to Charlie Skelton actually made it into Conspire. Jump forward two years, and the Guardian has a whole news section on Bilderberg, and Charlie Skelton’s Bilderblog. There is a  Bilderberg hash tag that seems to be loading tweets at a rate of a few each second, and the Bilderberg Group even has an official website now. But the change I am most interested in is the emergence of a new protest group. You guessed it – Occupy Bilderberg. Here is the group’s press release, explaining their mission. They are correct that there has traditionally been a media blackout of the event, and even though this has changed this year, most main stream press outlets are still ignoring the meeting. And they are also correct that this group does represent the 1%, or perhaps even the 0.01% as I saw one tweet suggest.

When I started writing Conspire, there was no Occupy Movement. It began before I finished the book, so thankfully I did have a chance to add a mention of it among the protestors at my Bilderberg conference. I guess in a way I predicted the future with this inclusion. This isn’t the only major world event I forecasted in the book that happened before I finished it. Now, I’m not saying I’m some sort of spooky Nostradamus. But there are some odd coincidences which also show just how much has been going on in the last two years:

I loved every minute of writing Conspire, and now watching some of my fiction become reality, is just as enjoyable as making it up!

This might be a good time to also formally announce that Conspire has been released. If you would like to occupy Conspire, you can find it on Lulu, and Amazon for Kindle. I’m also working to publish it on the iBookstore.

NOTE: Since posting this yesterday, I’ve had more time to look into the Occupy Bilderberg group. Unfortunately it appears that this group was created by Alex Jones. ‘Who is Alex Jones?’ I hear you ask. Here is an article about who he really is, and suffice to say that the Occupy Movement would like him to stay well away from them. In my novel, Conspire, the Occupy protestors at the Bilderberg conference are real Occupy protestors, not profiteering bigots like Alex Jones. I think it would also be safe to say that, although Alex Jones likes conspiracies and Conspire is all about conspiracies, Alex Jones would hate Conspire. 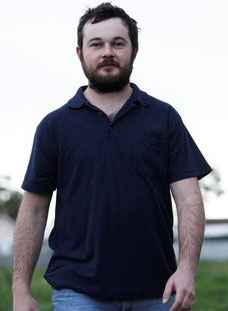 A quick update on Conspire – this weekend I finished the final edit of the first draft. My mum and I have tied up all the loose ends, well, all the loose ends we could find anyway. I put up a message on the Goodreads Mystery and Thriller group to see if anyone was interested in beta reading my first draft, and I have one person reading it now. I’m so anxious to hear what he thinks of my story! It’s hard putting my work out into the world for the first time, but it has to be done! I like the idea of getting feedback before the manuscript is finalised, from someone who isn’t a friend or family member. Depending on the feedback, I will either keep working on the first draft, or will move straight to professional editing.

I am still undecided on whether I will approach agents and publishers, or if I’ll bypass the traditional route altogether and go straight to self-publishing. I’ve got to a point where I’m really not sure which option is better.

Moving on from Conspire, I want to share an amusing story with you about something that happened to me. Yesterday I went to see the Australian movie – Snowtown. Here is the wiki page about the real events, and here is the link to the movie trailer.

I grew up in South Australia where the murders took place, and so I remember well the effect these crimes had on our small city. The Snowtown, or ‘Bodies in the Barrels’ story is about a group of serial killers who murdered people in their community for money and sadistic pleasure. They put some of the dismembered bodies into barrels, hidden in a bank vault in the small town of Snowtown.

I have always been more afraid of horror movies that are based on reality, and let me tell you, this was one horrifying movie! The evil was portrayed in such a way that you felt a bit dirty having watched it. I was terrified throughout the whole thing and had nightmares last night. I would definitely recommend seeing the movie, if you don’t mind having your entire world turned upside down for a couple of hours.

The main character, based on the real life serial killer – John Bunting – was played by Daniel Henshall. Bunting was particularly ghastly and Daniel played the part brilliantly.

Less than a day after seeing the movie, it was still hanging in my mind, when I went to my local supermarket for some groceries. Standing right in front of me was Daniel Henshall. I recognised him immediately, but I saw John Bunting, not Daniel Henshall. Without realising what I was doing, I gave a little scream of recollection. I was picturing this face torturing and chopping people up in the film. Daniel noticed me standing, stunned, in fright and the best I could do to retrieve the awkwardness of the situation was to say “sorry, I got a fright seeing you because I just saw your film”. He laughed, and you could tell he was quite chuffed to have elicited such a strong reaction.

Apart from being an amusing coincidence, to run into an actor who had had such a recent and strong effect on me, it reminded me that artists are always hoping for a reaction as this is why we put our work out there. Henshell appreciated having scared me, because that was what his part required he do. I’m hoping my beta reader is thrilled by Conspire, as if he’s not, it’s back to the drawing board!