An Open Letter to Andrew Bragg 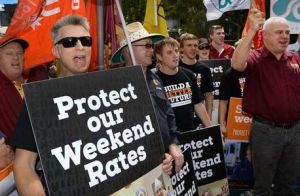 I am responding to your thoughtful opinion piece in The Guardian which aims to justify the Liberal Party’s creation of The Fair Go propaganda website.

I’m so sorry that the Liberal Party feel so weak and neglected by the mainstream media that you have to spend money to create a website to get your voice out there. Feeling powerless, like you have been blocked from the national debate, must be an awful situation to find yourself in. I hadn’t realised that the readership of your mastheads at News Ltd had shrunk to such an inconsequential size that you can no longer rely on them to campaign on your behalf. How horrible for you. I wasn’t aware that your IPA representatives appearing on every ABC news show are having such a hard time getting your point of view across. It must be awful to have all this coverage and still be losing the argument.

I did know, however, that your ranting right wing cheer squad on Sky News gets less views than some of my blog posts. And I’m a nobody Andrew! I don’t even get paid for putting my opinions out there, yet more people are interested in what I have to say than watching Chris Kenny whine and bitch. This must be more than frustrating for you, poor thing. It’s no wonder you felt compelled to publish a piece in The Guardian to finally get your voice out to sizeable audience. Good on you for doing that.

But Andrew, I hope I can make you feel a bit better, a bit less meek and downtrodden, by straightening up some of the misinformation, or perhaps the misunderstanding, that you have included in your piece. Firstly, you need to remember that Australia is a democratic nation. As irritating as this fact is for you, it means that us Australians have every right to give a few dollars here and there to fund organisations that represent our interests, such as GetUp, or trade unions, or environmental groups, in order to contribute our resources towards the political debate.

I know how much you would prefer if us pesky little peasants would just sit down, shut up and let your political movement of big business money trample all over us. But that would just make things too easy for you Andrew! Us people, we have lives and opinions and rights and needs and wants, which includes the right to join political movements that represent us.

I must admit, it is an uphill battle for the sectional interests of us small guys. As you no doubt know from your Liberal Party fundraisers, big business has infinitely more money than the individuals who donate small change to environmental groups, GetUp, unions, any progressive cause you can name.

Remember when the Labor Government wanted to even up the playing field of funds distributed from selling Australia’s natural resources by introducing the mining tax, and your Liberal Party, side by side with billionaire Australians, with the all-powerful mining lobby, campaigned to kill that policy? The miners spent $22 million, which is small change to them, I know Andrew! But what hope do I have, who earns an annual salary the size of Gina Rinehart’s lunch bill, of having a say in political debates, without democratically pooling what little resources I have into a David-like voice to respond to the Goliaths representing the Liberal Party?

We noticed when Prime Minister Turnbull spent $1.75 million of his own money, again, loose change to him, to help himself get elected. Does this sound like the actions of the weak and powerless? We noticed that Julie Bishop’s Mid Winter Ball gown cost $36,000, which is substantially more than a Newstart recipient receives in a year.  Cheer up Andrew, your power is in safe, rich hands!

So, really, you don’t need to feel so sad about your current predicament, where you think you’re voiceless and powerless, when really you’re holding all the cards in a loaded deck, and us little guys are barely chipping into the power you have to control the way we live our lives. For example, if unions are so big and powerful, how come some of the country’s lowest paid workers have just had their penalty rates cut after your side won your tireless campaign to reduce their wages? Why do unions face some of the toughest industrial laws in the world, such as not having the legal right to strike?

We know you’re disappointed that WorkChoices is democratically dead, buried and cremated, but in actual fact you should be cheering, as you’ve managed, against the odds, to bring in your WorkChoices-utopia by stealth, with casualisation, near-zero wage growth and precarious work the new norm for millions of Australians. This is all while your business mates reap 40% increase in profits, yet, in their powerful, almighty position, choose not to pass any of these rewards onto the workers who created the wealth. Geez Andrew, if this is what it means to be powerless, you guys are doing pretty nicely without power!

I hope this letter has made you feel better about your position in the political debate. It must be down-heartening every time you check the stats for the laughingly called ‘Fair Go’ website to find still no one is engaging in your content and you only have 242 followers on Twitter. You’ve no doubt paid Parnell McGuiness’s PR consultancy far too much money to create the site and it’s not getting anywhere near the audience these dollars would get you if you invested them in well written, relevant and less-propogandist content on a quality opinion site. But hey, you’re right that we should all have a fair go. Keep at it and us little guys will keep at it too. It’s only fair that we each do what’s in our best interest.

One Comment on “An Open Letter to Andrew Bragg”