This is one of comments Clementine Ford put on her blog to display the type of cyberviolence she endures.

Just in the past week, I’ve been upset about the behaviour of three groups of people. After watching Sarah Ferguson’s harrowing investigation into Australia’s domestic violence epidemic, Hitting Home, I am upset at the hundreds of thousands of Australian men who are abusing their partners and families. As I wrote last week, I am also upset with the racist and bigoted people who preach hatred in the streets under the anti-Islamic banner of Reclaim Australia. And over the last two days, my outrage has been directed at the perpetrators of ‘cyberviolence’, as called out by Clementine Ford and Van Badham. While thinking about these groups, and wondering to myself ‘who on earth are these people?’, it suddenly struck me. Surely there is an overlap? Surely there are people who belong to all three groups? 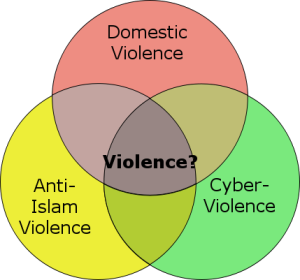 The more I thought about it, the more real this Venn diagram became. Perhaps the overlap is bigger than I imagine.

All these groups share common characteristics. None of them are ‘decent’ people. The problem with concepts like ‘decent’ is that they are defined by the shared cultural values of a society, and if society’s expectations of decency aren’t very high, it’s unsurprising that there is little value placed on the expectation of people acting decently. For instance, if we have a Prime Minister who doesn’t do the decent thing of calling out groups like Reclaim Australia, we, as a society, are tolerating this type of indecent behaviour. If we have a government who doesn’t bat an eyelid at children being raped in government detention centres, decency is something from a bygone era. Another example is the Navy’s decision to give Elliot Coulson, a perpetrator of domestic violence who stalked and killed his girlfriend before killing himself, a military funeral (which they’ve belatedly apologised for). And then we have the mainstream media, which is peppered with PhotoShopping Daily Telegraphs and angry shock jocks and columnists who, through their own indecency, give society a free-pass to their shared indecency. So our society isn’t decent, and in turn the members of that society aren’t decent. This is not rocket science.

Another shared feature of these groups is that they all blame their victims for their anti-social and violent behaviour; it’s their wife’s fault for making them angry, or their girlfriend has lied about being hit, or they blame Islamic people for making them hateful towards them, and they blame the Clems and Vans of the world for daring to call them out and to have opinions they disagree with. Nothing is ever their fault. They take no responsibility for anything. And why would they take responsibility when they’re not decent people and there’s never been any consequences in the past? No one has ever expected them to be decent, nor called them out when they aren’t. They even have a government who fights to defend their right to be bigots, their right to be discriminatory, and then joins in with them when they take up this right. But rights have responsibilities. Or so I was brought up to believe. Yet when you scroll the Facebook accounts of the men who are cyber-violent, such as those abusing Clementine Ford, or Twitter accounts of members of Reclaim Australia, it’s incredible to realise these people have absolutely no shame in saying the most vile, hateful, nasty and even criminal things (yes, death threats are a criminal offence), with their real names on their profiles, for all their friends and family (and employers!) to see. So not only are these people indecent, they are shouting their indecency from the rooftops as a proud part of their identities.

If I am right (and I suspect I am) that there is an overlap, and therefore a slippery slope between public indecency and physical violence, shouldn’t we, as a society, be treating any evidence of hate, bigotry, racism, misogyny, sexism as a red-flag that this person is dangerous? I remember being told once that children who are violent towards animals often grow up to be violent towards humans. So if a teenage boy is abusing women on his Facebook page at age 16, might he, without any intervention, be the very same person who will control or bash his girlfriend, his wife, his children, and join in violent hate rallies against peace-loving Australians, just because he thinks this is his right? As suggested by the eloquent Ken Lay, Former Victorian Police chief commissioner, it’s time for us, as a society, to stop justifying bad behaviour as ‘boys will be boys’. And perhaps it is also time to reassess what counts as ‘decent’ in our society and hold everyone up to this expectation before our civilisation becomes completely uncivil. Perhaps it’s time to take seriously the warning signs that we have a problem, and intervene before more people get hurt, or indeed, killed.

5 Comments on “The same people”