← An Open Letter to the Liberal Party
Racist Australia? Of course. →

The election: hope versus fear 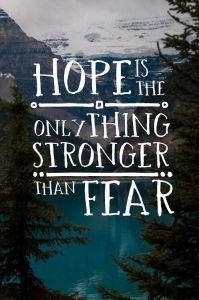 Abbott is gearing up for an election. First he wants to ensure he will be the leader who takes the Liberal National Coalition to an election, and this is by no means a done deal. And then he is convinced that he can sloganeer away the poll deficit he needs to win a second term. Or rather, his strategists are convinced they can come up with effective slogans to take Abbott to victory, and Abbott is happy to believe them.

As reported in the Guardian this week, Lynton Crosby of campaign strategist firm Crosby Textor, is confident he can use the Liberal staple of simplistic messaging around ‘economic competence’ to convince a not-very-interested-in-politics electorate to forgive everything Abbott’s wrecked with his wrecking ball, and to have permission to fire up an even bigger wrecking ball in a second term. But the question is, will the electorate fall for what basically comes down to a dirty, negative, fear campaign again? Because that’s what Crosby really means when he says Abbott needs to rely on a simple message focused on economic competence. He really means that Abbott needs to scare the electorate into thinking they’ll lose their jobs, they’ll lose their homes, they’ll be destitute and on the street if they don’t do what they’re told and vote for Abbott’s Liberals. It really is as simple as that apparently.

But are Australians going to fall for this again? Are the Turkeys really going to vote for Christmas? Will Australians again drink up ‘Great Big Tax’, ‘Axe the Tax’, ‘Stop The Boats’ and more recently ‘Jobs and Growth’ – the bogan slogans that make Abbott sound like a 2 year old whose just learned a new word and wants to wear it out on his parents?

This is where I pause from typing and I sit back and worry. It doesn’t make rational sense that Australia would be so gullible to fall hook-line-and-sinker for such an obvious, shallow, implausible slogan to scare them into making the second biggest mistake of their lives after their first mistake elected Abbott in the first place. But there is nothing rational about politics. Especially when you mix irrationality with fear, a fear that experts like Crosby and Textor are very good at whipping up. This is why the re-election of Cameron in the UK sent chills down my spine. Cameron was just as unpopular as Abbott and resided over just as big an austerity-caused-badly-managed-economy with high unemployment and barely any growth. Yet he still was given the keys to the country again to wreak more havoc on not just the UK economy, but also to hammer the UK health system, education and social welfare system. But Crosby and Textor helped the very-easily-frightened electorate to forget about all this havoc and they’ve given Cameron a mandate to make the situation even worse. Fear really does make people do stupid things.

It seems like a simple problem to solve, however, it’s not. If you were working as a campaign strategist for Labor, you would think you could just point out to voters how utterly hollow Abbott’s ‘economic competence’ slogan is, how unfounded in reality, and how dangerous it would be to let Abbott’s economic incompetence continue to hurt the economy and to destroy jobs. The statistics are easy to quote – Abbott’s unemployment rate of 6.34% is the highest in 13 years, growth is stagnant and even Abbott’s favourite stick to beat Labor with – government debt – is up $100 billion since Abbott took over the job. The ironic thing is that Australia’s debt and deficit wasn’t even a major problem when Abbott turned it into a vote-winning-slogan, and yet he’s gone on to make this debt even larger. Yet still his strategists feel confident that they can run a fear campaign based on the strongly held electoral perception that Liberal governments are better economic managers than Labor governments. Even after Labor saved the country from a recession during the GFC, a GFC the Liberals claimed never happened, which Labor says didn’t happen to Australia because of Labor’s good economic management, which the Liberals now say is the reason the Australian economy isn’t strong – because the world economy still hasn’t recovered. See how irrational politics is? Facts are irrelevant when it comes to emotional responses to fear campaigns. Labor strategists have hopefully worked this out.

But what’s the answer then? If you can’t convince the electorate that Abbott’s claims of economic competence are as baseless as all the promises he made during the election, which have now been broken, how does Labor ensure that Abbott doesn’t win a second term?

I suggest Labor should learn from Abbott’s success and forget about quoting facts. Facts are really good at convincing people they are right when they can use them to back up their own preconceived, emotional beliefs. For instance – I know Abbott’s the most incompetent and unproductive Prime Minister Australia has ever had, and this article gives me the facts to prove it. A swing voter, on the other hand, doesn’t care about such analysis. So what Labor needs to do is forget about facts and appeal to emotions. In doing so they have two options: the first is to use the dark-arts of Crosby and Textor by scaring people about the prospect of an Abbott second term. This should be relatively easy. The very thought of such a thing terrifies me and although I know I’m not your average swing voter, surely Abbott has done enough scary things in the last two years for Labor to be able to convincingly show how things could get much scarier if Abbott has another go? And surely he’s given enough hints about what he might do in a second term – such as his promise not to increase the GST this term or to make any industrial relations changes this term – to scare people off living this reality?

The second option is to rise above the negative fear campaign of what an Abbott second term would look like, and to appeal to a much more savoury emotion – hope. Labor’s ‘hope for the future’ campaign could focus on all the things Abbott is interested in wrecking that Labor wants to invest in. Jobs of the future. Technologies of the future. The educational needs for jobs of the future. A safer environment for the future. Energy needs and industries of the future. I love the idea of a ‘rise above’ campaign, but I also recognise it’s naïve to think the electorate is ready to put long term progress ahead of short term Abbott-opportunism. So really there is a third option; a little from column A and a little from column B. Simplistically it looks something like this – ‘Abbott will wreck everything, so vote Labor for a brighter future’. Sounds good doesn’t it. If only it was so simple.

4 Comments on “The election: hope versus fear”