← Nothing to lose
Does a blood oath fade in the wash? →

Privatisation: Coming to Public Schools and Hospitals Near You 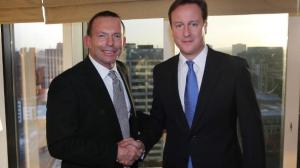 Usually it’s nice to be proved right – but not when you’re proved right about something as bad as this. I’ve been saying for some time that an Abbott government would have a much more right wing, neoliberal, or just plain nasty agenda than some people seem to think. And here we are, seeing an example of a right-wing privatisation agenda played out in Queensland for our edification. There is no doubt that this is the same path Abbott would love to take this country down.

One of the reasons sometimes given for the premise that an Abbott government would be essentially inactive is that the right wing agenda of small government has run its course – there’s hardly anything left in government hands to privatise. But anyone who thought that is mistaken. Not only is there Medibank Private and Australia Post, there’s all those services left to outsource, like education, health, and disability.

Abbott and Newman probably didn’t figure out for themselves how to push the boundaries of outsourcing further than asset sales. They didn’t need to – their Conservative mate David Cameron in Britain has been showing them the way. This article in The Guardian describes what is happening there as the creation of a ‘shadow state’; all the real state’s substance is being eaten away by outsourcing of what should be its core functions, in favour of an unaccountable, corporate, copy of a state. ‘The winners are private equity and shareholders. The losers are the low-paid and the vulnerable. And in the end we all pay,’ writes Zoe Williams. Here are some of the issues she raises; I’ve expanded on them a bit.

What Williams describes is an excellent example of the operation of a market society as opposed merely to the market economy we already live in. In a market society, the only human role is as an individual consumer. Getting the services you need becomes your particular responsibility, rather than the responsibility of the state. In Britain they talk about the ‘welfare market’. Says it all, really.

Privatisation is, of course, already quite advanced in Australia. However most of what has been outsourced so far has actually involved something physical, like buses (Serco here in Adelaide), or water supply.  Not much by way of human services has been privatised. Prisons are arguably a human service, and there are already some private ones –Serco again, and GEO Group (a subsidiary of an American company.) The old Commonwealth Employment Service, which was definitely a human service, was privatised by the Howard government. But outsourcing human services is not a road we have generally taken – until now.

The Queensland Commission of Audit, chaired by none other than Peter Costello, has now delivered its final report on ‘ensuring value for money in the delivery of front line services’, which is not very good code for ‘what other government services can we outsource’. Unsurprisingly, it recommends a massive sale of assets including electricity providers Energex and Ergon, and seven government-owned corporations, including the Queensland Investment Corporation, and SunWater. Queensland obviously has some catching up to do; most other states have already sold off such assets. But LNP thinking on privatisation in Queensland goes further – just like the British Conservatives. Over the last few days, we’ve seen press releases announcing that private companies will build and maintain 10 Queensland state schools, that all prisons will likely be privatized (with fewer staff per prisoner) and that the delivery of a range of health services will be through private and not-for-profit health providers and partnerships. (I’m sure it’s just a coincidence that Ramsay Health Care donated $100,000 to the Liberal Party last year.) So you cut the public service, as Premier Newman has done, then say that services can be better delivered by the private sector. This complements the ideological agenda of asset sales, and has the added advantage of undermining the power of the public sector unions and thus the Labor Party. A win all around for the LNP. And all announced after the election.

Abbott shares Newman’s love for privatisation. He’s even copying Queensland’s post-election audit commission. Not much left to privatize? Don’t be deceived. They’ll be eying off all those (by definition) inefficient government services. And it’s hard to unscramble an outsourced omelette. By the time we get another Labor government, the damage to the state and its citizens will have been done.

6 Comments on “Privatisation: Coming to Public Schools and Hospitals Near You”