Now is the time 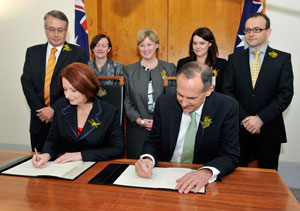 Unsurprisingly, guest-blogger extraordinaire, my mum, Kay Rollison, has something to say about this year’s election. Enjoy.

Now is the time for all good men (and women) to come to the aid of the party.

Is this anything more than a typing exercise? Yes, it has to be. Men and women of Australia, we can and must unite to Keep Abbott Out.

Before the election was called yesterday, I read another of those annoying articles, this time by Jack Waterford in the Canberra Times, along ‘the parties are both the same’ line. No, Jack, they are not.

You might think that anyone who says, as Waterford does, that Abbott’s parental leave policy is to the left of the Labor Party’s doesn’t deserve further consideration. But his argument is unfortunately quite common – and very dangerous – so it needs to be addressed.

Even if on every other policy Labor and the LNP were the same, which or course they’re not, they would still be different on climate change – which, incidentally, Waterford doesn’t mention. Kevin Rudd was right when he said this is the great moral challenge of our age – even if he subsequently wimped out on doing anything about it. It is also the great economic challenge of our age; how are we going to ensure some sort of social equity in the face of it?

It’s easy to argue that Labor’s carbon pricing hasn’t gone far enough. But what is the alternative? The party of ‘climate change is crap’. The party of paying polluters from public funds to stop polluting. The party who will force the unemployed to join a green army – where else will it come from? This is rubbish policy. It cannot be allowed to happen. We aren’t going forward fast enough, but we can’t afford to go backwards.

I read a tweet the other day pointing out that the only time the Greens get any publicity is when they attack Labor. Anyone who attacks Labor gets publicity from the mainstream media. This isn’t the Greens’ fault; it is their misfortune. They presumably say lots more – but just don’t get reported. Their proposal for a permanent disaster fund, for example, seems to have sunk without trace. I’ve argued elsewhere – and been attacked for it – that of course the Greens oppose Labor. They want to replace them, not work with them. But for the foreseeable future, this isn’t going to happen. And if Greens supporters care about that future – which I’m sure they do – cooperation is what is needed now to keep Abbott out. Do they really want to play into the hands of the LNP and their cheerleaders in the press? The chances are that the Greens will retain the balance of power in the Senate; they can use that to push a Labor government forward on environmental issues. But good luck trying to do the same if there’s an Abbott majority in the lower house.

And of course this isn’t the only difference. ‘Less tax and less regulation’ was the Liberal promise in response to the Prime Minister’s speech to the Press Club on Wednesday. Less tax, at a time when Federal revenues are falling, is either Magic Pudding economics, or a cynical failure to acknowledge that with less tax goes smaller government. Cuts to the public service are only the beginning. Was Isobel Redmond’s decision to ‘step down’ as Opposition leader in SA forced on her because she told the truth (twice) about Liberal plans to slash public service jobs and, inevitably, public services? Then if Campbell Newman’s slash and burn isn’t evidence enough, we’ve only got to look at the outsourcing movement that is disembowelling welfare provision in the UK to see what is the likely program for the Liberals. Let’s not kid ourselves that Joe Hockey’s ‘end of entitlement’ is about ending middle class welfare. By all means protest the move of some single parents onto Newstart when their youngest child turns 8. And yes, this extended the existing Liberal policy. But Tony Abbott suggesting that the unemployed should have to move to Western Australia and work in the mines isn’t a brain snap; it’s a mindset. If you don’t understand this mindset and the consequences of such a mindset running the country – it’s time you educated yourself. The clock is ticking.

And what are the regulations the LNP want to remove? I’m sure you can guess which ones they call ‘green tape’ – environmental impact statements, for example. A government prepared to regulate the market is essential for any sort of equitable social policy and sustainable environment. Which party do you think offers this?

I could go on about the differences – and probably will over the next months. And I’m not suggesting that Labor deserves carte blanche on its actions. Asylum seeker policy in particular is one area which deserves scrutiny – though again it’s a no win situation for Labor as far as the mainstream media goes. There’s bad publicity for boat arrivals, bad publicity for conditions of detention, bad publicity when asylum seekers drown on their way to Australia and bad publicity for asylum seekers returning home. Whatever Labor does, or does not do, in this area earns them bad publicity. Who wants to be part of that? And which would you prefer? Labor which, however unsuccessfully, is trying for a regional solution, or a party that calls asylum seekers ‘illegals’ and wants to turn back the boats? These are not trivial differences.

Everyone is entitled to have policy areas they are passionate about, but a Federal election is not about one or two policies. It’s about who will be in charge of making the decisions across all policy areas, how they see this role, who will benefit from what they do, and who will lose out.

I’m calling on people who vote Green to make sure they know who their enemy really is, and at least make sure they give their second preference to Labor. I’m calling on undecided voters to think about what vision they have for the future, and whether this vision is for themselves alone, or for their whole society. Even if all you worry about is yourself and your family, think very carefully about who best manages the economy. Read what the IMF has got to say about that. And I’m calling on the cynics – the ‘they are just the same’ brigade, to really look hard at what the Opposition is offering – presuming they give you the chance. And if they don’t, you might wonder what they are not telling us.

Every election someone will say that this is the most important election in a generation. Abbott’s already said it, and just this once, I agree with him. A LNP government will not be business as usual. Not only will it seek to destroy any gains that Labor has made towards equity and sustainability, it will also do its best to allow the market freedom to ‘develop’ as it chooses, and to further entrench existing inequalities. We can only stop this if everyone who cares – and there are masses of us – unite. We are concerned individuals, members of unions, members of environmental groups, people who assist refugees, people in disability groups, farmers, small business people, tweeters, bloggers, workers in the renewable energy industry, IT experts, retirees, education providers, scientists, any workers of any kind in fact  – we are found everywhere – and we must unite to KEEP ABBOTT OUT.

8 Comments on “Now is the time”