← The two party system
An Open Letter to Chris Kenny →

The Scourge of the Swing Voter 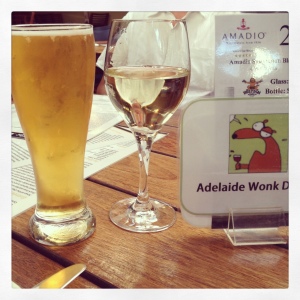 Happy Australia Day! Last night I went to the inaugural Adelaide Wonk Drinks. It was, as promised, heaps good. I had my very first offline Twitter argument, which was interesting. This particular argument reminded me why I would prefer to debate a die-hard right-winger than an ‘undecided voter’. At least the right-wingers know what they want and understand immediately what I want, and we can disagree to our hearts’ delight. But an undecided swing voter who seems to be tempted to use his valuable democratic right to deliver an informal vote is, in my opinion a very frustrating person. What would the people of Syria think?

The reasoning that this particular undecided voter gave for his indecision was an assortment of arguments that I think can fairly be filed under the heading of there’s no discernable difference between Labor and the Liberal National Party. I guess it really depends who is doing the discerning. And if you’re just assessing your individual life experience under either party, instead of looking at the way their policies affect society as a whole, then I would argue that you’re evaluating the parties’ differences through a far too narrow, short-term view.

The idea that we’re just as well off or just as badly off under either party is quite a trendy response to politics of late. It’s the same attitude that most of the mainstream media seems to hold – politicians can’t be trusted and the outcomes of their policies are not so different that they’re worth analysing or even discussing – a pox on both your houses. In my view this is a load of bollocks. I can’t help but notice that those who propagate the notion that the parties are no different from each other are also the ones who enjoy patronising the views of anyone who they view to be ‘rusted on’. To support and campaign for a political party these days seems to be akin to being viewed as a ‘fanatic’. Or as my sparring partner said last night ‘a barracker’. I was told that people like me, who obviously support one party passionately over another, are acting as if the Labor party is a football club. I am in fact a one-eyed supporter of a football club and so I find this suggestion particularly irritating. I am very passionate about my football club and my politics, but my support of the Port Adelaide Football Club and my support of the Labor Party are too entirely different beasts.

The choice of which football club I support was made at a young age. Choice is probably the wrong word here. I inherited the club from my father, who inherited it from his father. I was ‘rusted on’ to the club from birth. But choice is the most important word when it comes to supporting a political party. Because that’s what politics is all about – one option versus another. To say that both choices are the same is blatantly untrue. If you’re trying to find similarities between the Labor Party and the Liberal National Party, sure, you’ll find many. You’ll also find times (not so many recently) when decisions are made jointly by the government and the opposition in a bi-partisan approach. But ultimately, the entire reason that there are two major parties in Australia is because one is progressive and one is right-wing. Those who think they are being smug and clever, or winning some award for cynicism by proclaiming that both parties have come so close to the middle that there is no longer daylight between them, need to take a closer look. And they need to consider their own values and ideas in relation to the policy agenda of each party.

As an example, let’s use the policy area of the environment. As a progressive voter and a supporter of action to reduce the catastrophic effects of climate change, I will support the major party which is most likely to implement policies that align with these values. Many will argue that the Greens are a better choice in this policy area, and that may be true. But ultimately, a Greens voter still needs to choose between Labor and the LNP when assigning preferences, even if it is just the decision as to who gets the last number on the ballot paper. Since the last election, the Labor Party has implemented a Carbon Price. There are many voters who think this policy didn’t go far enough, and that’s a valid argument to have. But when choosing between the policy of Labor – action on climate change – and the policy of Abbott’s Liberal National Party – scrapping the Carbon Price – it’s blatantly obvious that the two parties are poles apart and my choice is an easy one to make. My adversary, the undecided voter, was really overreaching on this topic. He said that he wants action on Climate Change too, but whatever Tony Abbott says, as Prime Minister he won’t be able to repeal the Carbon Price, so it ultimately doesn’t matter who you vote for. Really? Is this not like saying ‘I like apples, and I don’t like bananas, but this banana doesn’t really taste like a banana so it doesn’t matter if I eat a banana instead of an apple’. This is nonsensical.

And what about the topic of redistribution of wealth, something else I am very passionate about. When I am assessing the effect Labor’s policies will have on social and economic equality in Australia, versus the LNP’s policies, it’s obvious to me which party is offering the outcome that most closely aligns with my values. For example, the Mining Tax is an important reform designed to share the wealth from the natural resources that we all own. The Labor party introduced this policy, the LNP have vowed to scrap it. It’s probably a good time to also mention that I don’t consider middle class welfare to be a policy of wealth redistribution. Wealth distribution maybe, but not redistribution.

Another policy area that is important to me is education. Access for all to quality education is vital for social equity. The Gonski policy proposals more closely align with my ideals in the area of education policy than anything I’ve ever heard the Liberals say on the topic. But does this really surprise anyone? The very definition of being right-wing means that you prefer ‘small government’ over ‘big government’, and small government invariably means cuts to government funding for education, health and welfare.

The attitude ‘there is no difference between them’ has resulted in a lot of angry Queensland and Victorian voters. It’s a bit late now to remind them that a protest vote against the Labor party will help deliver a conservative alternative. A lot of Queenslanders and Victorians who voted for their right wing party now appear shocked that these right wing governments are executing a right wing agenda. Cuts to education funding, cuts to public service jobs in the area of health; slash and burn, and Newman’s version of austerity, not stimulus. But can you really blame Newman and Baillieu for doing what they were given a mandate to do? If the voters were too uninformed to understand the policy agenda of conservative governments, they’ve got no one to blame but themselves. This is a really tough way to learn that the two parties are not the same, and that the outcomes of their policies are completely different.

It might sound trendy and intellectual to deny the very simple concept of choice between two opposing sets of political principles. It might seem simplistic for me to say that my choice between Labor and Liberal National is an easy one based on which platform best aligns to my vision for the country. But I really do find the choice incredibly simple. This does not mean that I barrack for the Labor Party. It does not mean that I think that everything the party does is perfect (as many things the party does are clearly far from perfect). It doesn’t mean that I agree with every single policy that the party develops, nor does it mean that I blindly support everything that Labor members say. I’m not a mouthpiece for the Labor Party. I have not been brainwashed to adopt their ideas and policies from some propaganda machine. But I make a considered choice between two different options. The Labor Party is just a vessel for me to get the Australia I want, not the other way around. Going back to the football club example – I was a Port Supporter before I ever watched a game of football. But I was a progressive before I chose a political party to support.

12 Comments on “The Scourge of the Swing Voter”