← Outrage Brigade
Which politician is telling the truth? →

Out of bounds on the full 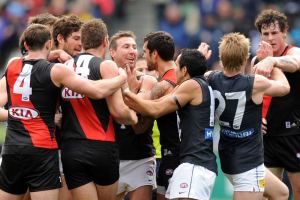 Following on from my last post, my mum, Kay Rollison, has contributed another great insight into the terrible standard of political reporting in our mainstream media. Enjoy!

Victoria, like many other independent bloggers, wrote last week about the failure of the mainstream media to understand the significance of Julia Gillard’s speech denouncing the sexism she has been subject to. As Victoria pointed out, for much of the media, it is apparently ‘just politics’. Gillard’s attack on Tony Abbott was followed up by the very same journalists with reports about sexist remarks directed at Abbott’s female chief of staff. Tit for tat. See? Both sides are as bad as each other.

This is part of the ‘politics is a dirty game’ convention. Working within this convention – as the mainstream media do – day to day politics is a game in which both sides seek advantage. Both sides play hard, both sides are dirty, therefore they are no different. It’s like reporting sport. One side kicks a goal, someone fumbles a pass, the ball is out on the full, and the scoreboard shows the result, courtesy of the fortnightly polls. It’s just a question of who is better at the game. Look at the scoreboard mate.

It’s easy for reporters and commentators to write as if the daily battle of tactics means that the two sides are just the same, and as bad as each other. Of course some journalists (guess which ones) don’t think the parties equally bad; they cheerfully reflect the anti-Labor bias of their employers. But others present themselves as ‘independent’: think Sales, Uhlmann, Hartcher, Crabb, Taylor, Grattan, Cassidy or Oakes. They claim that their ‘equally bad’ treatment shows ‘balance’, or even handedness. They routinely argue that after all, the opposition will do anything to get rid of the government now or at the next election, and the government will do anything to stay in power now or at the next election, and this constitutes the (equally bad) politics they report on.

Of course there’s a place for day to day political reporting. It’s not just that it’s the Canberra Press Gallery’s bread and butter. It’s not just that politics tragics couldn’t live without it. What happens on a short-term basis affects the morale and effectiveness of both sides and the view the electorate takes of the parties. And the particular circumstances of this parliament render day to day reporting compelling for anyone interested in politics. The hung parliament itself makes this reporting important, as theoretically the government could fall at any time. Tony Abbott’s single minded strategy of trying to force an election by making the parliament unworkable also captures day to day attention. The more or less precarious hold the leader of each party has on their position as leader also feeds the daily round.

However the mainstream media don’t do a very good job of this day to day reporting. This is partly because some journalists just report what politicians say, very often word for word – ‘the Leader of the Opposition said…’ Some reporters find it easier to write stories based on press handouts from politicians than to do any actual research themselves. (It’s also editors who want a particular spin, but that’s another matter.)

Yet even when they report accurately on the success or failure of the day to day tactics, they rarely question the political strategies that underlie them. Abbott’s strategy of making parliament a shouting match feeds cynicism in the electorate about politicians and politics. We’ll all pay for that in due course. But do any of the mainstream media call him on it? Does anyone even give a nod to the realities of minority government? The tit for tat reporting of the debate over Slipper’s disgusting text messages was allowed entirely to overshadow the issue of whether the Speaker was entitled to the presumption of innocence, and, indeed, the issue of the separation of powers. We laughed when Bjelke-Petersen didn’t know what that meant, but apparently journalists don’t know either, or don’t think it’s important enough to comment on. And then of course there’s the whole issue of the undeniable use of sexism, personal denigration and outright lies by the opposition leader. Which side is doing the damage to the national interest here? You wouldn’t know from reading the mainstream media.

But presenting politics as a rather sleazy sport creates an even more serious problem. Concentrating on the day to day tactics means that substance, or lack of it, goes unreported. Politics is more than just tactics, or even strategy. It is about how power and influence should be apportioned, and how wealth distributed in a society. The whole issue of the long-term outcomes of policy decisions is all but ignored by our mainstream media. There’s a theory about how he thinks the world should work behind Tony Abbott’s attack on the carbon tax. Which mainstream journalists explore it? They just report his hyperbole. And what about the constant talking-down of the economy by the Opposition? What sort of economy do they want? Who would benefit? And turning the boats around? What view of Australian society does that represent? We don’t know much about the Opposition’s plans for Australia should they win office. But even what we have been told goes unquestioned. Who is analysing the winners and losers from the direct action carbon reduction plan, and asking Greg Hunt about it? Who is looking at how paying the salaries of women on maternity leave is going to work out for poor women and asking Abbott about it? Journalists say that their job is to report impartially, not to comment in a partisan way – that is up to columnists. But surely this doesn’t mean taking whatever is said at face value? Is anyone interested in fact checking? Even if politics as a world view is too hard for them, couldn’t they manage a reality check on the bits of substance we have been given?

It’s interesting to speculate how the mainstream media would treat an Abbott government. Media outlets that already cheer-lead for him would continue to do so, which hardly comes as a surprise. And the self-appointed ‘independent’ journalist? My guess is that it would be business as usual. It’s just a game, after all.

We are being served up rubbish. Whatever you think of any of the parties seeking power in Australia, no one’s interest (except possibly lazy journalists’) is served by promoting the assumption that they are all the same. We need to know the differences in how they understand power and influence and the distribution of wealth, as revealed in what their members say and do. Certainly there are policy similarities, and these deserve discussion too. The argument that the major parties are as bad as each other, and by implication without any substance, is at best blind, and at worst self-serving. Far from making journalists neutral umpires, the ‘they are just the same and as bad as each other’ convention distorts reality, and turns the media into players. And guess which side that helps?

After I’d written this post, I saw Kevin Rudd on Lateline saying much the same thing, though his emphasis was on the politicians who treat politics as a game, rather than the media who report politics as a game. (He did take a swipe at the media as well for over-emphasising personal differences.) I also saw The Hamster Wheel’s ‘obituary’ of Rudd, which suggested that all of his actions are self-serving. Well perhaps that’s partly true, but in this case Rudd is right. Political debate should, as he says, be policy based, and we should be asking if political power is being used to benefit the few or the many.  And did Tony Abbott really say, as Rudd alleges, he loves the smell of blood on the canvas? If so, I rest my case.

2 Comments on “Out of bounds on the full”