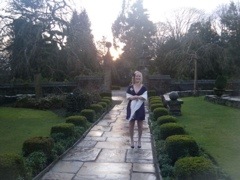 As I start writing this post, I’m going to warn that it might not be polished as I’m typing it on my iPad notepad. I’m snuggled in front of the fire on a cold winter afternoon in Elland, UK, and after spending the last hour reading 2011 summaries on news sites and blogs, I decided my neglected blog deserved a summary post of its own to end 2011.

So here’s where I’m at: Conspire is finished, including editing, rewrites, beta reads, professional editing and more rewrites. I still like the story – I reminded myself this after reading a few chapters on the flight over here. I’ve sent out around eight proposals to agents so far and had a few form rejections. One request for a partial got me excited, but it was even more depressing to then be rejected at second base.

The process of trying to find an agent and then publisher (traditional route) makes me very anxious. I’ve been doing a lot of reading about book deals and the path people have taken to find success in publishing and it’s struck me that agents and publishers and now doing two things that make the chances of a book deal for a first timer even more slim. The first is that MOST agents now don’t accept unsolicited submissions. Gate is closed, locked and rusted shut. Depressing state of affairs and incredibly frustrating. The second explains why the first is happening. Agents and publishers aren’t waiting for new authors to seek them out anymore. They’re instead approaching successful self published authors and offering the already proven talent representation. So where does that leave little old me and hundreds of thousands of other aspiring authors? There’s no doubt it’s harder than ever. An industry famous for taking the safe route has just removed their biggest risk – untested products.

I can already hear you asking, why don’t you self publish then Vic? Obviously that option is still very much open to me. The problem is, I did this with Times of Trouble and had it downloaded over 30,000 times on free ebook sites. But now that it’s on Amazon UK and costs 86p, I’ve had less than 10 downloads. Times of Trouble has joined the great slush pile of novels on Amazon and has vanished off the face of the earth. 30,000 free downloads is great, but until you’ve made money from your book, you’re not considered a successful author. Did you know there are over 50,000 ‘Crime, Mystery and Thriller’ novels available on Amazon? I just feel sick at the thought of subjecting Conspire to this quagmire. It’s worth noting here that I’m not one of these literary snobs who thinks that all self published books are crap. I downloaded three ebooks to read on the plane and the two self published ones were much better reads than the expensive traditionally published one that was written by a very famous Australian author. I haven’t put a book down for ages and I did try to persevere with this one, but it was seriously boring. There’s a lot of crap being published – traditionally and by self-published authors. That’s also quite a depressing thought.

This has all turned into a bit of a whinge. Sorry about that. I’ll wrap up. My plan for early 2012 is to send out a few more submissions to agents in the mostly delusional hope of finding representation. If this is as spectacularly unsuccessful as it has been so far, I’m going to try some creative ways of finding an audience for Conspire. I already have some ideas. I just need time to implement them. Self-publishing isn’t as easy as uploading a book to Amazon, even an already popular book as I proved with Times of Trouble. So between moving interstate, renovating a house and a full time job, I will keep you updated as best I can whilst also trying to find time to carry out this mission. It’s more than likely I’ll also start writing novel number three. I’m a much happier person mid-plot.

Happy New Year to my few but devoted blog readers 🙂