← Book Proposal for Times of Trouble
So it begins… →

Giving my book away for free 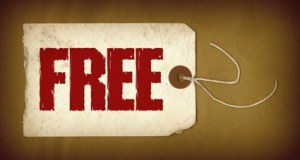 Something I have been thinking a lot about lately are the merits of giving my work away for free, in order to build an audience and a profile as an author.

When I first posted Times of Trouble on Wattpad, Smashwords and Free-eBooks, I felt like I had sold the farm. Or more accurately, given the farm away. I wondered if people would download the book, and send it around to people, until I completely lost track of it, and it was being read for free by people who potentially might have paid for it in the future. But this bout of anxiety was very short lived. As soon as I saw how many people were downloading it, writing reviews, and giving it the virtual thumbs up, I was so excited, I realised I had something money couldn’t buy – a new found belief that maybe one day someone would feel justified in spending money on my work. And real life fans. People wanting to see more of my work. People encouraging me to keep going. This is gold for any writer. When your mum and your friends tell you they love your book, it is impossible not to feel that they had to say that. They love me and don’t want to hurt my feelings. But anonymous Jo Blogs on the internet doesn’t give positive reviews because he can’t bare to see my eyes well with tears when he tells me my book is horrible. Out of all the reviews on the internet for Times of Trouble, only one has been mildly negative. On the site ‘Good Reads‘, which is like Facebook where you collect books instead of friends (hooray!), I received the following review from Jack:

“I enjoyed this; a good plot with twists and turns; a somewhat naive style. Would benefit from a bit mor proof reading.”

When I saw this, I thought, if that’s as bad as it gets, I’m not doing too badly! Jack managed to make me laugh at his typo – ‘mor proof reading’ and I  still managed to get a nice comment and three stars! I’m not exactly sure what a naive style is, but maybe it’s evidence that it’s my first work and everyone starts off a bit green? The proof reading bit is an obvious flaw – my book isn’t professionally published and has never been proofed by an editor so I wouldn’t expect it to be as perfect as it might be with some investment of cash. I’m actually surprised more of the reviews didn’t mention editing.

Anyhow, my experience in giving my book away for free has been incredibly positive, and I don’t feel like the farm is gone. It’s not even leased out. I think the farm has just got bigger and bigger; the crops growing, the paddocks extending and the cows having plenty of calves. My confidence was improved to the point where I was willing to write Conspire. A world government conspiracy thriller about nuclear disarmament. Easy peasy!

Thank you to all those people out there in the world of the interweb who downloaded Times of Trouble, read it, enjoyed it, and most of all – let me know they liked it. I’m hoping one day you will stumble across Conspire, or my next book, or the one after that, and say ‘I remember Victoria Rollison! She wrote Times of Trouble and I really enjoyed that. So I bet I’ll enjoy this book too!’ Ahhhh. That thought is very satisfying.

One Comment on “Giving my book away for free”